Transparency is key to Juan Cazares—more likely known as his Instagram handle, @juanskindiary. Among his online community, he’s known for giving a clear look into how he makes his photographs look the way they do—it’s information not always readily shared, but that Cazares keeps in an Instagram highlight called BTS. He’s self-taught, and at the end of the day, he’s encouraging the same. Cazares collaborated with Youth To The People on some of our 15% Vitamin C + Clean Caffeine Energy Serum imagery, and spoke with YTTP about creative energy, transparency, and self-education.

Alyssa Shapiro: I know you've been a good friend of the brand for a while and our art director, Kimmie, thought that you'd be such an excellent fit to collaborate with on these images, given your vision and also your ability to handle everything from styling to photography to retouching. So I wonder what your favorite part of working on these visuals was.

Juan Cazares: Working with Youth To The People creatively was something that I've always wanted to do. So when they reached out for that, I was really excited because I really love the overall aesthetic and the packaging. It’s really minimalistic, but at the same time, well put-together and it really makes sense. I liked how they really let me do what I wanted with the imagery. They gave me the colors for it, and I would've never thought to use a really bright orange, but I really loved the way the bright orange complemented the packaging. So I really liked the overall process of the images and the creative aspect of it. 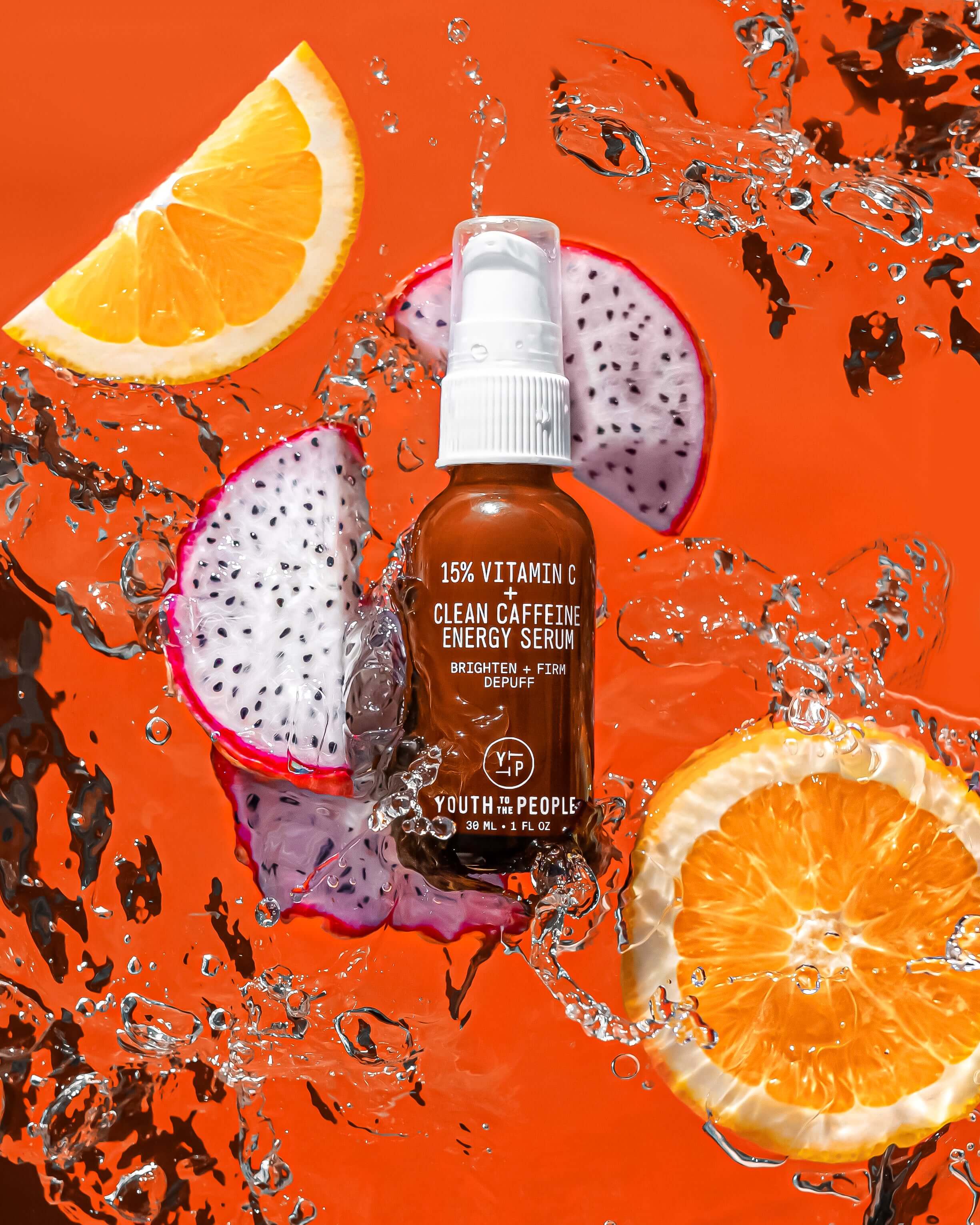 AS: You're self-taught right?

AS: What encouraged you to step into the beauty space? Can you tell me about the process of teaching yourself to become a photographer and a digital artist?

JC: When I started my page, like two years ago, I mainly started because I was having a lot of skin issues and I found that maybe starting my own page and engaging with others with similar skin concerns would really help me, since I found a lot of ingredients and forums on Google to be really confusing. So maybe learning about skincare from other people would be easier. But the photography aspect of it, I never thought I would ever be a part of it since I didn't know anything about photography. I just really liked the overall—like when I saw brands’ socials—I really liked the branding and the imagery for the product.

So I really liked to like, experiment with that on my page and like out of nowhere really started blowing up. So I started doing it full time. I've been doing it full-time for about five months now.

JC: Thank you. And, um, like about learning, I really pretty much just learned from YouTube and Google. Like I never went to school for it, or really did much of it. Like I would maybe ask a friend or two about what they recommend camera-wise, equipment-wise, but learning about it and editing and everything retouching, I pretty much learned by myself.

AS: I think that's really encouraging probably for other people to hear that, like, you don't necessarily need access to traditional education to learn how to do something you're interested in and passionate about.

AS: How have you seen representation for BIPOC and men shift since you first entered the beauty industry?

JC: When I first entered, there were probably two or three guys in the community, which I followed and I've seen that change like a lot within the last two years, which I think is really good. It's a more broader range of people versus like the same people you see all the time—which is amazing since it's giving more opportunities to more people who aren't really being seen in the media.

Everybody uses skincare. It doesn't matter who you are. So everyone kind of being represented as a good thing, I believe.

AS: I think it's necessary. What steps do you think still need to be taken to ensure that the beauty industry is a more equitable environment?

JC: I think more BIPOC being at the higher ups and being more in-control of what's going on will ultimately lead to better results within the community, versus just having them as models or a spokesperson. With them actually being in control is when you'll actually start seeing like a huge change.

I want to see more people that pretty much have more control over what's being shown or portrayed to us, actually being people that look like me... maybe a guy or somebody that isn't always like in the spotlight. I know that would have really helped me a few years back. And even now, like you still don't really see like a whole bunch of people that are pretty much being in control over things like huge projects. Like you'll see them in the photos and stuff, but they don't really have much control over what's being done.

AS: Something that's really compelling about your work is how transparent you are about your process. Why was it important to you to begin to share those behind the scenes looks at your process with your followers? Do you think that showing that and that transparency has impacted your relationship with these people, this community that you've created, and also with their perception of the industry?

JC: Yes. The reason why I share the behind-the-scenes of the majority of my pictures is because when I first started out, there was somebody that I asked about how to do something, but they weren't really willing to tell me how to do it. So I pretty much had to learn by myself. And I know a lot of people always asked me How did I do this? How do I do that? So I found it just smart. To give back to the people that are actually taking their time to engage with my content, to tell them how I actually created something. And I've had a lot of people DM me all the time telling me that something that I show them the behind-the-scenes of has really helped them with a photo they've been trying to make. I get a lot of really nice messages about how it inspires others and that's really why I do it. It's really cool. AS: Talk to me about creative energy, because your passion and your profession overlap, you're doing this full-time now. Where do you pull the energy to create from?

JC: I kind of rely, recently, on briefs. Since I do this now full time, being creative 24/7 isn't really something that comes naturally as much anymore. Like before I started, I had so many ideas and so many things I wanted to get done, which I created eventually, but after doing hundreds of hundreds of photos, you kind of lose that creativity in a way.

So you kind of have to take a break. Maybe look through Instagram, Pinterest and things like that for inspo. And then you create folders in your library and go off of that.

AS: That's really real. Like once you have time to actually make it all, you run through it and then it's like, okay, now what do I do? Is there anything you can do to kind of like reset or like bring yourself back to yourself, to like feel invigorated again and feel like ready to create?

JC: What I usually do is I'll take a few days off of social media. I won't really go onto anything and post. Listen to music. I'll edit images, but not really take any new ones if I don't have to. I really find that helps creative wise. And once I'm like, I'm done with it, then I'll be more energized and ready to take on new projects and be more creative with upcoming things.

AS: How does your energy unite you with the world around you?

JC: Currently since we are always at home, I find it—since I do work from home—to be very like in a bubble since I'm always working. I work pretty much in my room. It’s my office, my room. So recently it's just like work and personal life are just one. Hopefully that'll change next year, if I can find somewhere to move to.

But recently it's just been like the same thing every day, which can get really, really boring and tiresome, but trying to be positive and taking breaks from social media really helps with that.

AS: When you think about the future, what do you dream of?

JC: I'm more of a person that takes it day per day—like I find when I say really huge goals, if I don't meet them, I get really disappointed, so I try not to do that anymore. Future goals would just be to probably have my own studio one day, probably in my house, like a basement or something.

And just be very like financially well-off because growing up, I didn't really have financial stability in any way. So hopefully that'll be something that I'll be able to have in the future.

AS: Yeah. Well, definitely. I mean, it sounds like if you're able to pursue this, full-time, that's a good sign. Yeah.

JC: It's better than my old job.