Christopher Viggiano always knew he wanted to work in fashion, but it wasn’t until his 30s that the specifics crystalized and the visions became clear: shoes. At the time, even as a fashion designer working for major corporate companies in NYC, fulfillment remained elusive—until nudges from a hired life coach helped him find the tools to sort out his dreams. What followed was a series of synchronistic events that led Viggiano from New York to Italy, Sweden, and ultimately Los Angeles where he became and is currently a fashion and accessories design consultant for a rich spectrum of clients that have included Cult Gaia, Band of Outsiders, Jenni Kayne, Donald Pliner, Entireworld Enterprises, and S.R.STUDIO.LA.CA, the recently launched fashion line of contemporary artist Sterling Ruby.

At the time of our interview, Viggiano was balancing one full time and two consulting jobs on his plate. He still finds the time for nature, friends, afternoon yoga, and dancing in front of the mirror. How? “I work smarter now that I have more of a life balance,” he says.

Next up for the designer is Viggiano’s namesake footwear label, currently in process and manifesting soon. 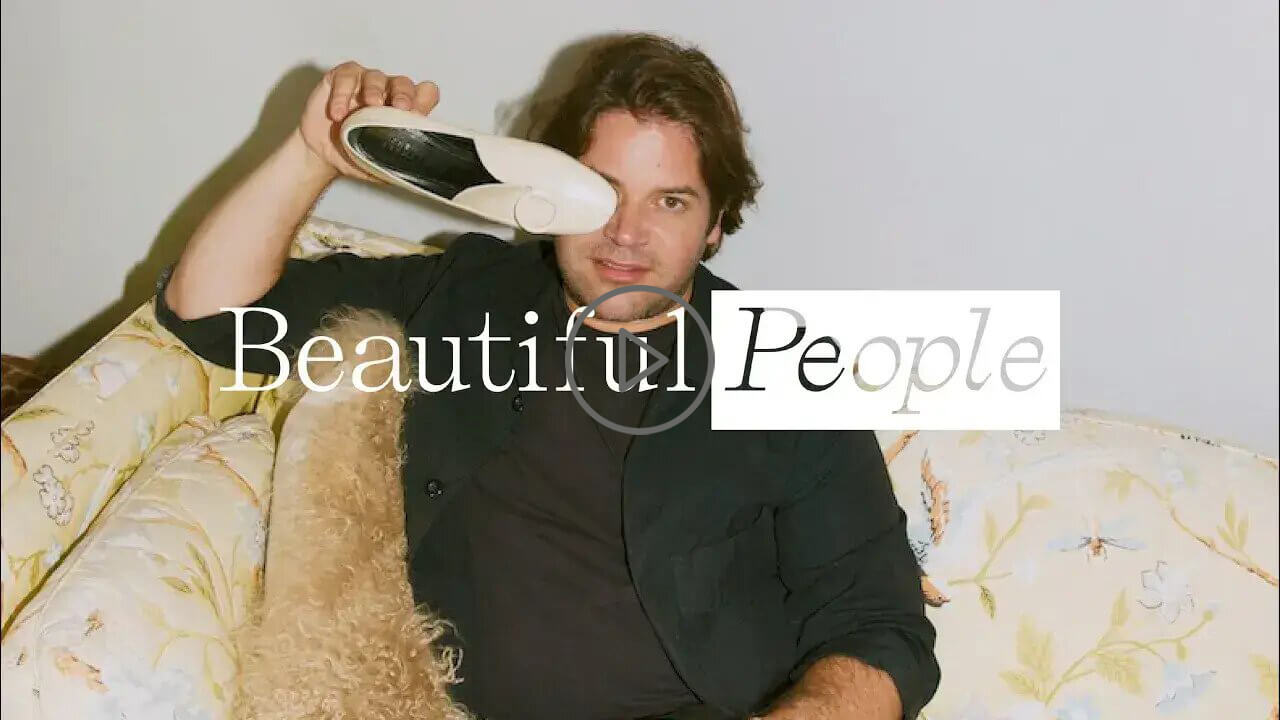 Alyssa Shapiro: What makes life beautiful to you?

Christopher Viggiano: Freedom! and I perpetuate that through dance and moving my body. I dance a lot alone in my apartment to really loud music. I also choose to walk a lot in LA which is unheard of, and when I walk I leave my phone at home, and that’s very freeing.

Alyssa: What mantras or rituals do you repeat to help you feel grounded?

Christopher: It’s not an actual mantra but there’s a song I particularly love to dance to in front of the mirror alone: it’s Irene Cara, the Flashdance song, and in it she’s like [singing], “Take your passion and make it happen.” I wish I could play it and dance to it right now.

I got into a habit a few years ago of doing morning pages. When I wake up in the morning before I even get coffee, I stream-of-conscious write in my journal for three or four pages, unedited. I just let it flow out, vomiting out the day before the day starts [laughs]. I find that incredibly helpful. Since doing that, I’ve noticed a lot more synchronicity happening in my life which is kind of amazing.

Alyssa: What kind of synchronicity?

Christopher: When I first started, I was in this job I didn’t really like, and I felt stifled in my career. All I really wanted to do was go to Italy and study shoe design, and I started writing about it every morning, “I need to go to Italy and one day I’ll get there,” whatever I wrote. And one day I ended up manifesting that; I asked my friend if I could borrow money from her, and I was able to go to this shoe school in Italy—and it changed my life. That was pretty amazing.

Alyssa: In fashion, there’s this move toward being the buzzy, it thing, and toward constant generation of new. Can you talk about how you create something lasting in that environment? How do you make work that feels important to you?

Christopher: Everything is a copy at this point, but when I sit there and sketch out of my own head, knowing what the inspirations are but not referencing them directly, you tap into a subconscious kind of thing and that’s when something new comes out. To me, that is authentic design.

Alyssa: I love what you said about streaming from this unconscious place…

Christopher: I never have liked it when I am at a job and it’s like, “Ok, sit down and design 20 pieces of outerwear, and it needs to be done in an hour.” For a creative person, that’s designing under the gun, that’s not how creativity works. We all know that when you’re on a hike in the woods or doing something other than your work is when creativity strikes. And you almost have to be like, Where’s my notepad! to write it down. I actually used to take little sketchbooks with me on the treadmill because I would think about these amazing ideas on the treadmill and I would forget them if I didn’t write them down. That’s when true creativity happens for me.

Alyssa: How did you get where you are as a designer?

Christopher: I was lucky, I’ve known since when I went to RISD that I would be a fashion designer, so I’m super grateful for that, because I know a lot of my friends are like, I don’t know what to do. I’ve always known in my heart what it is I wanted to do. I did not know that I really wanted to focus on accessories in particular, that happened later around when I was 30.

I was living in New York, doing the rat race, working at all these corporate fashion companies designing clothing. I would come home, and all I would do is sketch shoes in my sketchbook, and there was a total disconnect going on. I ended up borrowing money from a friend, I found this amazing school in Italy to study shoes at, I quit my job in NY, moved out of Brooklyn, left everything. It was a super [big] risk but I knew it was one that I had to take, and it’s led me to where I am now, designing shoes and accessories for companies in Los Angeles, doing what it is I really truly know I want to be doing.

Alyssa: You’re balancing a lot on your plate between full-time and consulting jobs. Is there an inner drive that makes you seek all this work? Is it a byproduct of the economy?

Christopher: Not by choice. Honestly I think it is how our economy is right now. A lot of people have to hustle. Even six years ago I had one job and was making this much money, and now I have to have three in order to make as much money as I was in that one job. It could have to do with how society is, we’re always swiping to the next thing: there’s something better; a better apartment; am I really in the right apartment; maybe there’s another one; is this person hot enough for me or is there someone else? Even with jobs. Is this the right job? Maybe I should have a second one just in case this other one doesn’t work out. Maybe it’s that mentality. I end up juggling stuff, and I honestly don’t like to do that, because I know myself, when my heart is in one thing, when I’m focused is when I know that I create the stuff that I’m the most proud of. Someone, please hire me [laughs] for the amount that I need. 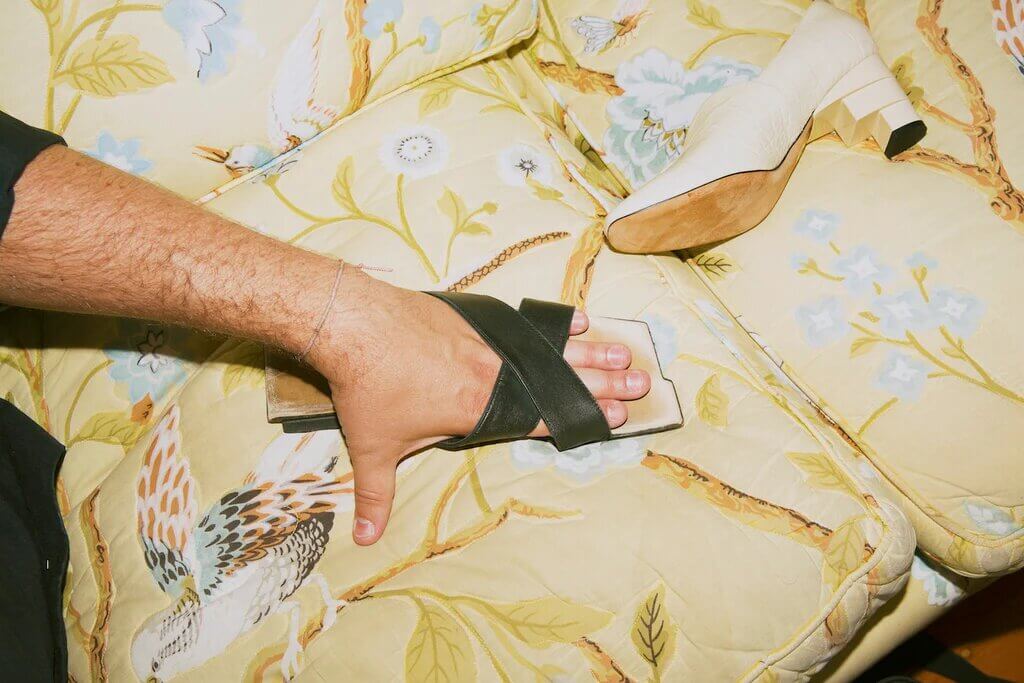 Alyssa: Is there a part of any of the three jobs you have right now that you find most creatively fulfilling?

Christopher: When I sketch, it’s a chance for me to tap into my subconscious. There’s a childlike quality when you let go. There are no rules. I try to tap into that as much as I can when I’m in my sketchbook. If a person were to go through my sketchbooks, they’d think I was crazy, but from within that craziness something comes at some point that’s like, Whoah! There it is! And you just know. There’s an element of taking away self judgement. If I sat with rules,

I’d be paralyzed.  You have to let go and push the boundaries.

Our bodies need to express themselves out, I truly believe that, whether that’s sketching in a notebook, whether that’s dancing alone in front of the mirror in your house, which I do all the time, I have to express these emotions that I have out in order to feel them, and get over them, because we are not our emotions. In the moment we think we are! You’re anger right now but in three minutes that could pass and you could be another thing. It’s so important to be able to sit there and be like, I’m feeling upset right now. A lot of times we’re taught not to, like don’t feel sad. We’re human beings! What separates us is our emotion! Asking someone to not have emotions at work is to ask them to be a robot.

Alyssa: How do you find life balance with everything you’ve taken on?

I make time for it. When I was living in New York, I felt like I was very much in this rat race. I was like, I must work until midnight! That’s what everyone does in the fashion industry there, and if you don’t, you’re not gonna make it! I would come home and pass out and then start all over again. That was not sustainable for me. I realized I was not living in a balanced way.

When I moved to LA I made a conscious decision to lead a more balanced life and for me what that meant is not working until midnight, making time to hang out with friends, making time to meditate in the morning or do my morning pages, going to yoga in the afternoon on my lunch break. That was unheard of in New York. I work smarter now that I have more of a life balance. love LA forever because of that. I’m sure I could have life balance if I moved back to New York, but I think I needed to come to LA to really understand what that meant. 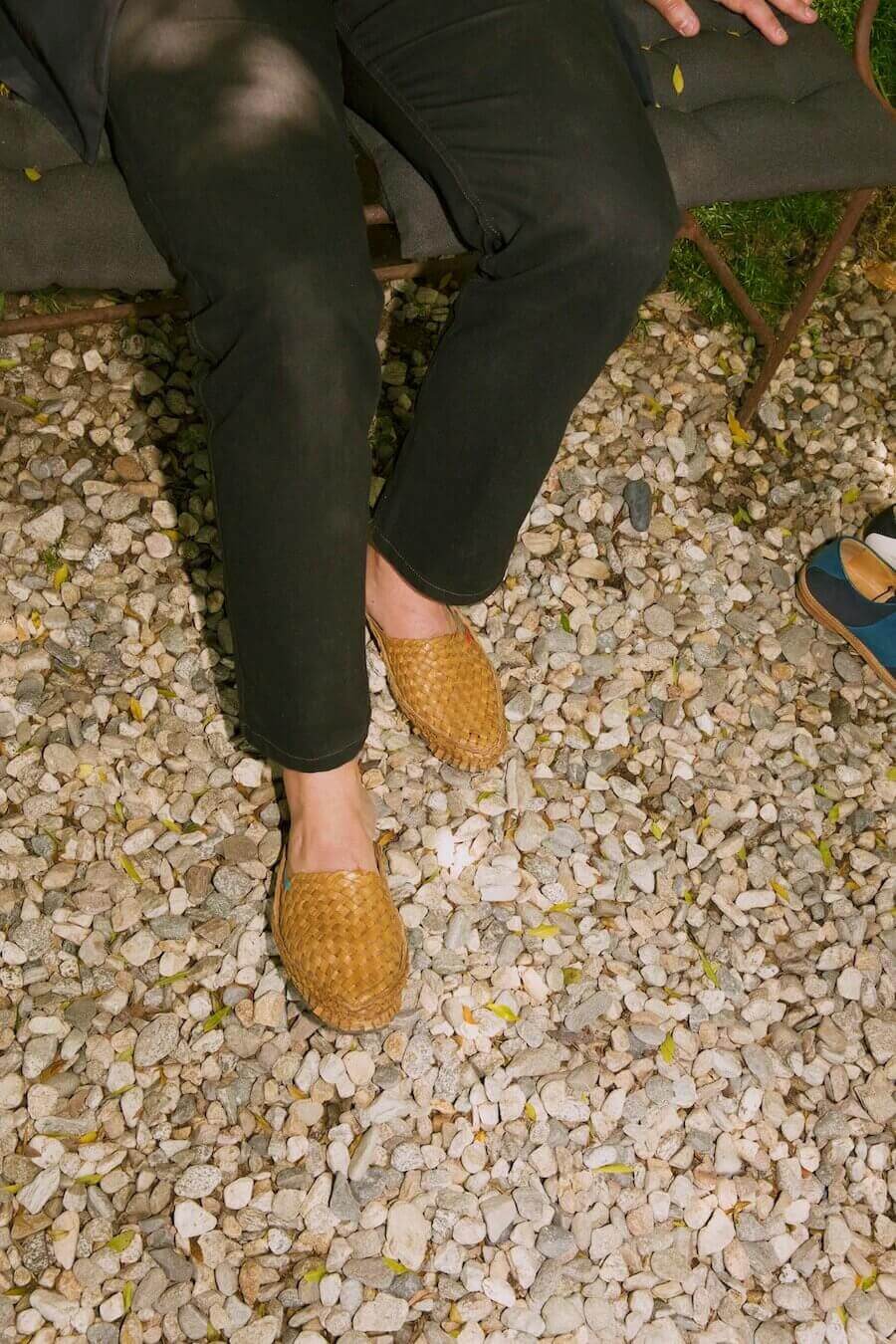 Alyssa: Talk to me about Italy and how that changed your career.

Christopher: I chose a super technical shoe school where they train you how to cobble shoes and make shoe lasts—the lasts are what make the shoe comfortable. It’s the most important part of making a shoe, really. It was less of a design school—I’d already been to design school. It was all taught in Italian, so I also had to learn Italian.

I ended up meeting all these Swedish kids who were also studying Italian, and I ended up going to Sweden to visit my friend Emma. We were walking by the Acne Studios building, and I randomly happened to have printed resumés on me, and she was like, You should just drop off your resume and see, and so I ran in there and was like, Hey if you need a shoe apprentice, I’m looking to be one, I love your brand. And in a very Swedish way, they called me within 30 minutes. I interviewed, went in the next day, and starting apprenticing for them.

I loved it there because in Sweden, things are very flat. In American companies there can sometimes be hierarchy, and you’re an intern and you’re just like, I’ll get the garbage! or Here’s some coffee! And in Sweden it’s not like that, it’s about consensus and Jonny [Johansson], the creative director, would come and ask everyone’s opinion, even if you were an intern. You get thrown in. I think that’s so important, to throw yourself into life. The biggest changes that I’ve had are instances where I kind of jump off the cliff, when I’m like, Ahh, I’m moving out of Brooklyn and leaving my job! And then in the end you end up landing and you’re so much more powerful after, you know.